Pape Avenue Cemetery, officially known as Holy Blossom Cemetery, is the first Jewish cemetery in the city of Toronto, Canada. The small cemetery is now closed to new burials, and is mostly hidden within the residential neighborhood of Leslieville.

It was established in 1849 by two prominent local businessmen Judah G. Joseph and Abraham Nordheimer. At the time the nearest Jewish cemeteries were in Montreal or Buffalo, and Joseph was concerned for his fatally ill son Samuel, who eventually became the first burial in the new cemetery. The location near the corner of Pape (then called Centre Road) and Gerrard was then in still rural areas to the east of the city. It was not close to much of the Jewish community, but was a convenient location to purchase.

It was one of the first Jewish institutions established in Toronto, being opened some years before the city's first synagogue. When Toronto Hebrew Congregation, the predecessor to Holy Blossom Temple, was established in 1856, it took over management of the cemetery, and continues to run it today. Over the next decades almost all the early founders of Toronto's Jewish community would be buried there. In 1883 the nearby Jones Avenue Cemetery opened, serving the members of Beth Tzedec Congregation's two predecessor synagogues. The small Pape Avenue Cemetery quickly ran out of room, and it was closed to new burials in the 1930s. To replace it, Holy Blossom opened a new cemetery further east on Brimley Road in Scarborough, Ontario. 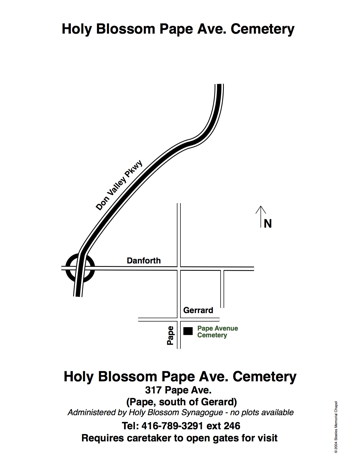